5 ways to find truth in your writing 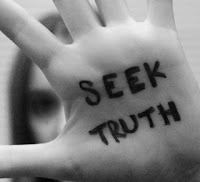 So you want to be omniscient? Here are five things that will take you closer to your apotheosis.
Personal truth leads to universal truth
It's a curious fact about writing that to get closer to other people you have to get closer to yourself. To reach out you have to reach in. Soul-searching, digging around in the past, examining old feelings and behaviours and understanding new ones are part and parcel of the writer's lot. Your own responses to things that have happened will always be much closer to other peoples' than those you invent but have never actually felt.
This doesn't mean regurgitating scenes and people from your own life in your writing – it means recreating the feelings you had at those times – love, jealousy, fear, exultation – it's those experiences you need to mine for your work. These feelings can be applied to any situation that any of your characters are in. You may never have been a secret agent but the fear you felt going for your root-canal surgery can be tapped to create the fear the agent feels when he's just about to go on a mission.
Honesty is closer to truth than knowledge
Authority of voice usually comes from knowledge – the more knowledge of your subject you have, the more authority your voice will have – hence the much abused aphorism 'write what you know', but it's also the case that honesty can achieve the same effect. Holden Caulfield is far from an authority on how education can go wrong for a kid, and he's not even a reliable narrator, but it's his honesty that immerses us in his story - that makes us care what he has to say – and it gives us a much more truer indication of what life can be like as a disaffected kid than some educational expert could ever do.
You can say more by saying less
It's always a temptation when you've got a great idea, or an interesting character, or you know a lot about a certain subject to dump everything you know on the page – but there's a huge difference between what you know and what the reader needs to know. Sometimes in our desperation to accurately describe something we over-articulate, over-state – diluting the power of the very feeling we seek to heighten. Who can forget the powerful last line of Hemingway's A Farewell to Arms. What does he actually say? Very, very little:
"After a while I went out and left the hospital and walked back to the hotel in the rain."
Genius.
Uniqueness is born from imitation
Chuck Palahniuk wrote Fight Club because he wanted to write The Great Gatsby, Tolkien wrote the Lord of the Rings because he wanted to write Beowulf, James Joyce wrote Ulysses because he wanted to write The Odyssey.
We can't be those great writers we admire, but that doesn't mean we can't aspire to be like them, it also doesn't mean we can't pinch their ideas. In fact, there's nothing really we as writers can do but tell tales that have already been told a thousand times before. The thing that will make them unique will be our truth. And how do we do that? See above.
So if you hear, see, or read a great idea, you're professionally obliged to steal it.
The truth is a question not an answer
If you think you know the meaning of life then you're wrong. Whatever you think the answer is it's not that simple. You want to write something timeless then you have to stop thinking you know more than your readers - that you will know more than your readers twenty or a hundred years from now. You don't and you never will. All you can do is describe the things you see and how they make you feel.
In other words, all you can do is tell the truth.
Email Post